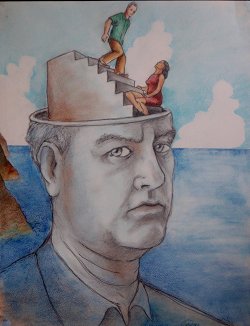 Subject: Visual Art
Room Number: 300 and 301
Teacher Message:
I am an artist and an art teacher. As a teacher, my goal is to train children to become artists; to impart to my students the skills, discipline, and outlook necessary to living an artistic life.

As an artist I work to delight children, to further the well being of native bird species, and to give visible form to the ideas and inspirations that take birth within me.
Every year my students are work on portraits for The Memory Project, an international aid organization. Each year my students paint portraits of children in an orphanage in a Third World country. My students paint these portraits to give these children a positive sense of themselves and a memento of their childhood that they can carry into their lives. For more information about The Memory Project you can go to:
http://thememoryproject.org/
My Advanced Painting students are presently preparing for their work for their exhibit at Gallery 210 at UMSL.
This year a team of my students created a Soundsuit: a dance costume designed to move and flow with the movements of the dancer's body. A dance student performed in the suit at our winter performing arts festival. The video of the dance impressed the St. Louis Art Museum and the Department of Elementary and Secondary Education, both of whom posted it on their websites. You can see thaT video at:
http://www.schooltube.com/video/7289cd66e1af46ac8d82/The%20CVPA%20Soundsuit
DESE liked the video so much that our dancer and Soundsuit team were invited to Jefferson City to perform in the Soundsuit at Arts Education celebration at the state capitol. You can see the video of that performance at:
http://www.schooltube.com/video/422fd95a0c8d4b668bd0/The%20CVPA%20Soundsuit%20on%20the%20Capitol%20Steps
In addition to my classroom work, I am involved in the arts and in educational life in several different ways.
In June of 2013 I received an "Artists Count" grant for $2500 to fund a project making and installing my stoneware birdhouses in parks and wildlife sanctuaries. I subsequently received another $2000 grant from Great River Greenways to install my sculptural birdhouses along the North Riverfront Trail. You can see work from both of these projects, as well as other samples of my work, including an installation of monumental stoneware tile playground sculptures at the College School of Webster Groves, at:
http://moleculefarm.wix.com/bill-perry
In May of 2011 I had a one-man show of my drawings at the Centene Center for the Arts, in connection with Circus Flora, St. Louis's own one-ring circus. You can see those drawings at:
http://www.billperrycircusdrawings.com/
I presently have an exhibit of my drawings at the Nancy Spirtas Kranzberg Gallery at the Sheldon Art Galleries. You can find information about that show at:
http://www.sheldonconcerthall.org/current-exhibits.php
And finally: this past year I mounted a Kickstarter campaign to publish a book, called "Road Trip, A Fold-out Adventure". The campaign was successful, and I published a thousand copies of the book. The book is available at Left Bank Books, The Novel Neighbor, and The Book House. You can see the book at
aroadtripbook.com
I am a member of the St. Louis Art Museum's Teacher Advisory Group, a group of teachers from throughout the Metro area who meet at regular intervals to confer with and advise directors of the Art Museum's educational department.
In May of 2010 I received my Master of Arts degree in Sculpture from Fontbonne University. In May of 2013 I completed my Master of  Fine Arts degree in Studio Art at Fontbonne.
In April of 2010 I was sworn in to Phi Kappa Phi, Fontbonne University's Honor Society. The requirements for this membership are that first, that I be in Fontbonne University's academic top 10%, and that second, that I should be recognized by my peers as being worthy of this honor. I am astonished that I was chosen for this; Phi Kappa Phi has had U.S. presidents and Supreme Court justices as its members.
For four years I curated "Humenagerie, Containers of Uncertain Ancestry", a juried high school show of lidded ceramic containers in the shape of human/animal forms. "Humenagerie" will open at the Soulard Art Market in January of 2014.
Biography:
EDUCATION
High School: Punahou School, Honolulu, Hawaii, 1966
Bachelor of Fine Arts, Ceramic Sculpture, University of Hawaii, 1973
Graduate Study, Washington University, St. Louis, Missouri, 1975-1976
Teaching Certification, Webster University, St. Louis, Missouri, 1978
Master of Arts, Sculpture, Fontbonne University, St. Louis, Missouri, 2011
Master of Fine Arts, Studio Art, Fontbonne University, St. Louis, Missouri, 2013
EMPLOYMENT
Art Teacher, Ceramics, Printmaking, Drawing and Painting,
Central Visual & Performing Arts High School, St. Louis Missouri,
1984-present
Art Department chair, 1985-1988

PERSONAL
I have been married since 1975 to my magnificent Hawaiian wife. We have two children, an angelic adult daughter with Downs Syndrome, and a beautiful eighteen year old boy, presently in college.