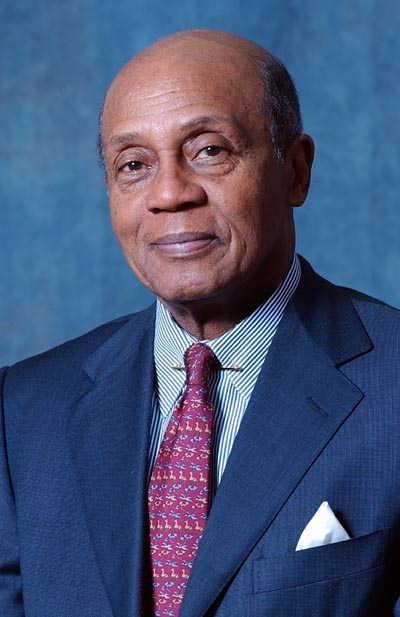 President and Publisher of the St. Louis American Newspaper

Donald M. Suggs was born in East Chicago, Indiana and attended the public schools there.  He graduated with B.S. and D.D.S. Degrees from Indiana University, then completed his post-graduate work at Washington University Dental School and Homer G. Phillips Hospital.  He served as chief of oral surgery at Dover Air Force Base in Delaware and was the first African-American to serve as an associate clinical professor at St. Louis University Dental School.  Suggs was a fellow of the American Association of Oral and Maxillo-facial Surgeons and maintained a limited private practice in his specialty before retiring in 2011.

Active in the civil rights movement in the 60’s and 70’s, he served as chairman of the Poor People’s March-On-Washington in 1968.  Later, he became founder and chairman of the African Continuum, organized to bring serious non-commercial African-American artistic endeavors to St. Louis.  He was a long-time president of the Alexander-Suggs Gallery of African Art based in St. Louis and New York City (1970-1989).  He is a founding member of the Center for African Art, (now the Museum of African Art in New York City) and is a former member of the board of directors of the Studio Museum in New York as well.  Suggs currently serves on the St. Louis Art Museum Board of Commissioners and its Collections Committee.

Dr. Suggs has been awarded honorary doctorate degrees from Washington University, the University of Missouri-St. Louis, Harris-Stowe State University and Saint Louis University and is the recipient of many civic awards.

He is currently publisher and executive editor of the St. Louis American Newspaper, Missouri’s largest black newspaper.  He is the father of Donald M. Jr. (deceased), Dawn Marie of Los Angeles, California, and Dina Margaret, of New York City and grandfather of Delali Maxine Suggs Akaffu. He has traveled widely in Europe, Asia, South America, the Caribbean, the Middle East and Africa.

Barnes-Jewish Goldfarb School of Nursing: Board of Directors

Grand Center, Inc.: Board of Directors

The Muny: Board of Directors

Nine Network of Public Media: Board of Directors

Opera Theatre of St. Louis: Board of Directors

Innovate St. Louis: Board of Directors

Webster University: Board of Trustees