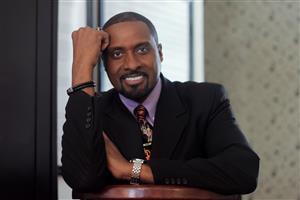 Dr. A. Michael Shaw a native of New Orleans, Louisiana now residing in St. Louis Missouri is fast becoming an organizational culture and climate guru. His many professional development workshops have helped individuals and organizations create positive environments for growth and development.

Dr. Shaw joined the St. Louis Public School System in 2017 as the Director of Innovative Concept Academy Alternative School and Griscom Alternative School. This is his 3rd year serving as the Principal of Gateway Magnet Middle School with an emphasis on Math, Science and Technology. Dr. Shaw is an exemplary 21st century educator and international speaker in the areas of education and Life Motivation. He holds multiple advanced degrees and has extensive life and professional experience that reach around the globe. He has worked expansively in the field of education since 1993. During this time he received numerous educational awards and community recognition, such as Teacher of Year and the distinct New Orleans Trail Blazer Award. He has been the keynote speaker for several regional and national educational conferences and have inspired many lives through hundreds of professional develop presentations.

Dr. Shaw’s Educational Leadership goals are to provide for students an environment that emphasizes 21st century skills to empower students to be critical thinkers and self-determined citizens in a globally competitive society.

Dr. Shaw accomplishments are widespread. Dr. Shaw currently sits on the Board of Directors for several corporations. He also served as the District 8 Area 17F Governor for Toastmasters International which service the St Louis Corporate Toastmaster Clubs sharpening the speaking skills of area business leaders. He was 1987 Tri-State Karate Champion and taught Karate for many years earning black belts in three different disciplines of martial arts. He worked his way through college as a Deputy Sheriff for Orleans Parish Sheriff Department. As a deputy he worked in the Special Investigations Division, Maximum Security Division, and as a self-defense trainer. He is a professional golfer and teaches golf in St. Louis and developed a golf team at Jennings Junior High. He was Vice President of the First Tee St. Louis a national junior golf program started by Tiger Woods and the Professional Golf Association (PGA). He also established a career as a professional model and actor. He has worked with stars such as Denzell Washington, Julia Roberts and Tyler Perry. He appeared in nine major motion pictures, thirty plays, and nineteen commercials. Dr. Shaw has authored 7 books and written three national touring stage plays and a children’s play titled, “The Purple Prince.” His Latest production “It Must Be Love ‘Cause Hate Don’t Hurt This Bad!” is getting rave reviews as it tours the country. He feels that every experience has prepared him to reach, enrich and impact the lives of the students he teach.