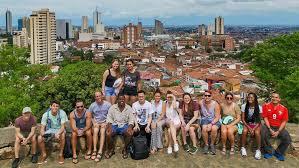 Spanish is spoken in over 20 countries all over the world. Chances are you probably even know someone (or more than one) person who speaks Spanish right here in St. Louis! Spanish is without a doubt the most useful language in this country after English. That's a lot of places and opportunities for you to use your Spanish language skills! In addition to this, knowing Spanish makes you more employable since you can communicate with more people than the standard American. Not to mention the fact that you'll have over 20 countries to choose from if you ever wanted to travel!

Spanish originated in Spain, a European country located on the Iberian Peninsula. Beginning around September 24, 1493, the country of Spain began colonizing or "taking over" the Americas (which is why so many places speak Spanish as their official language.) With the entry of Europeans, the people, language, and culture of the Spanish spread overseas. Of course, when the Spainards arrived, there were already indiginous peoples living in the Americas who would, along with Africans, mix and eventually become what we know today as Latin America.

Along with the mixing of 3 groups, came many traditions, styles of dance and music, arts, style, and food. This would include Mexican style cooking such as tacos and tamales, to the warm meat or cheese-filled baked pies known as empanadas in South America, and the classic rice and beans with fried banana in the carribbean. Not to mention, salsa! Both the food and style of dance known throughout the world. And who can forget all the movies that depict Latin culture so well like Coco and The Book of Life, which we watch during the Day of the Dead celebration in class. All in all, Latin culture is endless and with influences from so many groups, very relatable to nearly everyone in some way!